Rabbi Joseph B. Soloveitchik‘s view on any subject is significant because of his stature as a leading scholar and the influence his students exert on the contemporary Orthodox community. His position on brain death was hotly contested in 1991, and I can now post a long-lost letter on this subject sent by his family. But let us first look at a time line of events.

All agree that for over a decade R. Soloveitchik refused to rule on the issue of brain death, claiming that no one today has the necessary Torah expertise to decide such a complex and crucial question.

R. Soloveitchik grew older and eventually became incapacitated. R. Binyamin Walfish, at the time the Executive Vice President of the RCA, later stated that in late 1983 or early 1984 R. Soloveitchik told him privately that he decided in favor of the brain death criteria. R. Soloveitchik continued teaching for approximately another two years but according to his grandson, R. Mayer Twersky, was no longer answering significant public questions at this time.

At the RCA convention that took place on June 10-13, 1991, the organization voted to approve a health care proxy that accepted brain death criteria. The NY Times (June 15, 1991) reported: “In its continuing effort to apply traditional Jewish teaching to modern life, the largest group of Orthodox rabbis in the world has formally endorsed the donation of organs from brain-dead patients.” The cover letter to this health care proxy noted that R. Walfish testified that R. Soloveitchik had ruled that the RCA should accept the brain death definition.

In response, R. Marc Angel, at the time the President of the RCA, announced in The RCA Record (September/October 1991): “In deference to this letter, we have agreed not to cite Rabbi Joseph Soloveitchik’s name in connection with this pesak and to omit it in future printings of the health care proxy.”

I lack the stature to rule on this matter but I wonder whether this situation is sufficiently similar to that of R. Yechezkel Landau’s alleged retraction (link). I can see differences between the cases but I am not sure they change the conclusion.

Below is a video conducted by HODS in which R. Binyamin Walfish discusses his conversation with R. Soloveitchik:

And here is the letter sent by R. Soloveitchik’s brother and son-in-law denying R. Walfish’s claim. 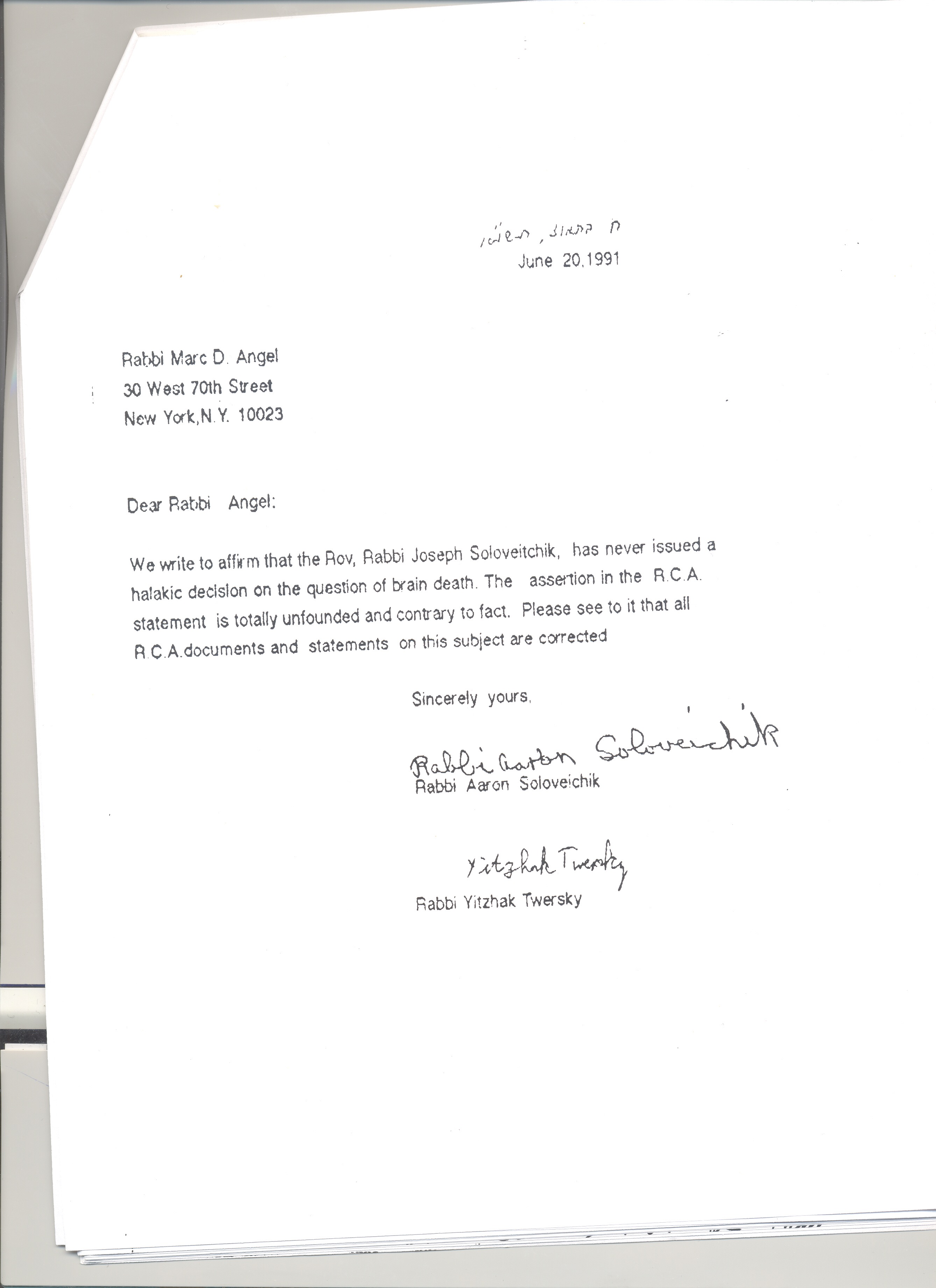