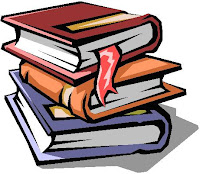 I don’t always have the chance to review each book, so I’ll list the books that I receive. Some of them will be quoted or reviewed in future posts. Here are the books I’ve received recently: