The Next Frontier II

Posted by: Gil Student in Legacy, Posts May 5, 10 2 Comments 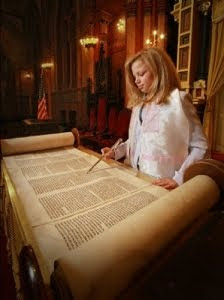 Further to the discussion of the next step for women in halakhah (link), I found the following discussing by Prof. Tamar Ross in a recent article — “The Feminist Contribution to Halakhic Discourse: Kol Be-Isha Erva as a Test Case” in Emor no. 1 (January 2010), pp. 56-57, quoting R. Yoel Bin-Nun (more on this article and its connection to Hilkhos Teshuvah 3:8 coming soon). Of particular interest is footnote 45, in which Prof. Ross, to the credit of her awareness, makes an explicit connection to the Conservative approach. And either Prof. Ross or I am misunderstanding R. Bin-Nun’s process. If he honestly believes that women today are obligated in all time-bound commandments, how can he change his mind because women don’t want to do them?

[Rabbi Yoel Bin-Nun, former Rosh Yeshiva of Yeshivat Hakibbutz Hadati in Israel, ruled] regarding women who voluntarily take upon themselves certain mitzvot, to which they are not formally obligated. Regarding this phenomenon, Bin-Nun begins with the assumption that, in principle, women’s obligation to perform all mitzvot is equal to that of men. Following the line of reasoning established by Maimonides and Abudraham and, more directly, the teachings of his personal spiritual mentor, Rabbi Zvi Yehuda Kook, Bin-Nun concludes that women’s past exemption from time-bound obligations was due simply to their dependent status, whereby their time was not under their control. Basing his conclusion on the fact that a goodly number of contemporary women no longer regard themselves as subject to the authority of their fathers or husbands, Bin-Nun maintains that they constitute a totally distinct halakhic category of b’not horin (independent women),[42] to whom in most instances the traditional concept of “woman” simply does not apply.[43] Relying further upon the seventeenth century halakhic authority, Rabbi Abraham Gombiner (known as the Magen Avraham), who holds that a woman who voluntarily undertakes the performance of a particular mitzvah transforms its status for her to that of a binding obligation,[44] Bin-Nun concludes that if a group of modern b’not horin consistently undertake the obligation of regular prayer, they may form a proper minyan for themselves and recite all those blessings that generally require a male quorum (devarim she-bikedusha).[45] This ruling could obviously be extended to other time-bound mitzvoth.[46]

This halakhic move on the part of Bin Nun is clearly innovative and daring. It succeeds in making creative use of existing halakhic categories in order to offer atotally new conception of the status of a considerable number of women vis-a-vis mitzvah performance, which for all practical purposes reduces the previous view to dead letter status. The infiuence of women’s voice in the broader sense upon the formulation of Bin-Nun’s opinion is evident in his admission that he initially assumed that women no longer bound by the need to serve others should be regarded as obligated to perform all the hitherto optional mitzvot. But when confronted by a general reluctance of women to assume men’s obligations, he altered his position and concluded that modern women who are not bound by the yoke of family responsibilities should also be left free to choose which of the optional mitzvot they will adopt.[47]

[42] According to Bin-Nun’s understanding, as he explained it to me in private conversation, the category of women who are b’not horin did not exist in Biblical times. By contrast, the halakha recognizes a progressive scale of independence among women, in which the category of “an important woman” (ishah hashuvah) comes closest to the liberated status of many contemporary women. [43] Bin-Nun specifically excludes from this rule the status of the woman in marriage. He approves rendering the financial fights of the bride equal to those of her husband, by means of a suitable prenuptial agreement; however, he does not see any possibility of abolishing the other unilateral aspect of the marriage agreement, according to which the husband acquires exclusive rights over sexual relations with his partner, but not vice versa. However, Bin-Nun does suggest that this asymmetry may also be overcome by a voluntary commitment on the part of the husband (even by means of an oath) to these sexual limitations. [44] Magen Avraham, Hilkhot Sefirat ha-Omer, at Orah Hayyim 489.1. [45] Bin-Nun’s line of argument bears a certain similarity to that of the late Rabbi Shlomo Goren, formerly Chief Ashkenazi Rabbi of the State of Israel. In one of his responsa, Rabbi Goren defended the right of women to conduct the full order of prayer, including those rituals and ceremonies requiring a minyan of men (davar shebikedushah), by virtue of the special dispensation given women by Rabbenu Tam in the 12th century to recite the blessing “Blessed are You, O lord, our God… who sanctified us through His mitzvoth and commanded us [… asher kideshanu bemitvotav vetzivanu] to perform x” if and when performing mitzvoth voluntarily. Rabbi Joel Roth uses a similar argument in the Conservative debate conducted in the late 1980’s regarding women’s ordination in order to overcome the traditional obstacle to her leading services as rabbi. See Joel Roth, “On the Ordination of Women as Rabbis,” in The Ordination of Women as Rabbis: Studies and Responsa, ed. Simon Greenberg (New York: Jewish Theological Seminary of America, 1988) where he develops this thesis at length. It should be noted that Rabbi Goren’s position (upon which he himself reneged, after it was raised in the context of the political struggle of Women of the Wall) has thus far been rejected by a decisive majority of Orthodox halakhic authorities. See Aryeh and Dov Frimer, “Women’s Prayer Services: Theory and Practice,” Tradition 32:2 (1998), 7-14. [46]The connection between the liberated status of the contemporary woman and her right to accept upon herself expanded mitzva obligation is implied in a somewhat different manner in an article by Noam Zohar, “Between Man and Woman: Editing and Values in Mishnah Kiddushin Chapter 1” [Hebrew], ‘Et la-‘asot 1 (1988), 103-112, which anticipates “a reformulation of the marriage bond, in order to remove from it the aspect of acquisition (kinyan) and ownership.” Ibid., 112. [47] From the explanation he gave me in private conversation. Similar remarks appear in his paper, “Women Should Rule for Themselves” [Hebrew], Nekuda 268 (Shevat 2004), 42-43.

I should note that Prof. Ross adds on p. 59: “Having said this, I do not wish to be understood as saying more than what I mean to say at the moment. I am not a halakhic decisor and far removed from such pretensions.”