Kriah at the Kotel 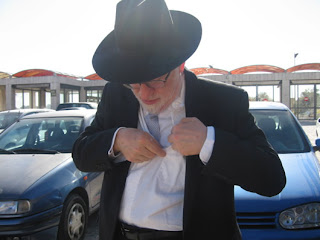 There is a widespread custom to tear kriah upon seeing the Temple Mount, as well as any of the ancient cities of Judea.[1] While there is a view that kriah should be performed when seeing all cities of ancient Israel,[2] the consensus among the authorities is that only the cities of Judea are ‘special enough’ to warrant it.[3] The tear is usually made on the left side of oneâ€™s uttermost garment. Even among those whose custom it is to perform kriah it is generally only done upon seeing Jerusalem and the Temple mount.

There are quite a number of authorities, however, who argue that in our in our day and age when Jerusalem is under Israeli sovereignty there is no longer any requirement to tear kriah for Jerusalem. Indeed, there are some authorities who hold that all the Judean cities under Israeli control are exempt from kriah.[4]It is a matter of dispute between the halachic authorities whether one is required to perform kriah when seeing Judean cities that have been transferred to Arab control, such as Beit Lechem and most of Hebron.[5] Most authorities, however, require one to tear upon seeing the Temple Mount even today.[6]

Although those who neglect to rip their clothes when first seeing Jerusalem and even the site of the Beit Hamikdash may not be conducting themselves properly, nevertheless they should not be rebuked.[11] In fact, even those who are negligent with all other zecher l’churban customs should not be rebuked, either.[12]

There is an innovative yet legitimate method to exempt oneself from having to perform kriah on oneâ€™s clothing. This can be done by arranging to first visit the Kotel area or Temple Mount on a Shabbat or even a Friday afternoon. This is because performing kriah as well as all mourning practices are forbidden at these times. In fact, doing so even eliminates any future requirements to perform kriah upon one’s next visit to these places as long as each visit is within thirty days of the previous one.[13] Alternatively, one can ensure to wear simple, old, or inexpensive clothes on the day of oneâ€™s visit to Jerusalem in order to discharge any kriah requirements obligations on such garments. One who is blind is not obligated to perform kriah.[14]