What Is Rabbinic Ordination? II 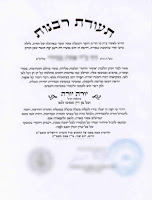 In a previous post, we discussed two views of rabbinic ordination: a memorial of Mosaic ordination, permission from one’s teacher (link). I’d like to explore further the latter approach. While this post does not affect the issue of women’s ordination, lest anyone think I’ve forgotten about the subject I will be including links to many past posts at the end of this one.

The question is whether, within this view, ordination is 1) permission to rule on halakhic matters (and serve as a rabbi) or 2) a testimony to its bearer’s qualifications. According to 1), ordination is the act of obtaining permission from one’s teacher. It is a function of respect for one’s teacher. According to 2), it is a public declaration that the ordained is qualified to rule (and serve as a rabbi).

What is the difference?

In Shulchan Arukh (ibid.), Rema seems to follow neither Rivash nor Radakh. He writes that ordination nowadays is “so that the people will know that he reached [the ability to] rule and that what he rules is with the permission of his teacher who ordained him.” In other words, ordination is a testimony that you are qualified to rule and you have permission from your mentor (who ordains you). That would seem to imply that you still need ordination even if your teacher is dead because people still need to know that you are qualified. And that a famous rabbi does not need ordination because people can assume that he is qualified and has permission. It also implies that anyone can ordain a rabbi, regardless of jurisdiction.

However, Rema continues in that same paragraph that if your mentor has died you do not need ordination. I don’t understand the Rema. Why not? He just finished stating that ordination is so that people will know that you are qualified to serve as a rabbi!

Interestingly, Otzar Yisrael (vol. 7 p. 223) quotes a 1651 responsum from R. Yitzchak Halevi, grandson of R. Leon de Modena, about whether the rabbi of a city can ordain someone living in a different city without the permission of the rabbi of that other city. R. Halevi ruled that ordination is a testimony of the person’s qualifications and therefore anyone who is capable of giving such testimony is allowed to do so. If it was permission, though, there would be room to argue that he could not do so.

Here are the posts about women’s ordination: