A New Old Perspective on Purim 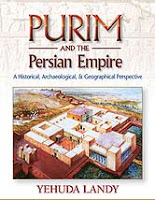 As Purim approaches, there is a fascinating new book that adds an exciting new dimension to the Megillah. Purim and the Persian Empire: A Historical, Archaeological, & Geographical Perspective by R. Yehuda Landy works to demystify the book of Esther by connecting it to historical and archeological data.

The author’s goal is to add a new perspective to the biblical book through the use of history. Drawing on examples of Medieval Torah scholars who used historical and archeological data to better understand the Bible, R. Landy defends his approach. He describes the goal of this book in his foreword (p. x):

The purpose of this book is not to authenticate the Megillah and/or the midrashim of Chazal. Nor is this book meant to resolve any halachic issues. It is meant as a tool for understanding and visualizing the events of the Megillah.

To some extent, the book succeeds. The pictures of ancient items such as gold cups (pp. 53-55) and jewelery (p. 68), excavations at Shushan and labeled diagrams of the capital palace, and depictions of people on reliefs allow readers to visualize to some degree what the characters and events looked like. The interpretations of places, events and terms based on historical information also adds to our understanding of the Megillah. For example, the differentiation between the city of Shushan and the capital of Shushan (the king’s palace) that emerges from archeological excavations explains a lot of the events in the Megillah (R. Reuven Margoliyos mentions this in his Ha-Mikra Ve-Ha-Mesorah).

The book begins with four essays and then proceed to explain various verses (in the order of the Megillah) based on history and archeology. It concludes with an edition of Esther in Hebrew and English. The colorful pictures and diagrams in the book are stunning. The commentary is generally interesting. But is it any good? Is the history accurate?

As a rule, the book chooses a frum version of history but not too frum. The author accepts the consensus view that Achashverosh was Xerxes and not Artaxerxes. He notes that there is a discrepancy between Chazal’s chronology of ancient Persia and conventional chronology. He writes that there are different ways to handle this but that he will be following Chazal’s chronology (and, in a footnote [p. 40 n. 17], directs readers to Mitchell First’s book — link). In everything, he is careful to note when there are disagreements but to choose the “frum” approach.

I was surprised to see how often the book explains midrashim based on history. For example (p. 80):

[Esther 4:17 – Mordechai (thus) crossed over and did according to everything that Esther instructed him.]

The royal mound at Shushan is bordered on the west side by a river currently known as the Shachor River… On the eastern side of the mound, the Persian workers dug canals and filled them with water in order to isolate the royal palace from the rest of the city. Thus, in order to notify the Jews of Shushan that they were to fast for three days, Mordechai was forced to cross this moat, or stream of water…

One surprise is when the author writes that Vashti and Esther are not mentioned in historical sources at all (p. 57). There are actually historians who suggest that either Vashti or Esther is mentioned.

Also surprising is how the book does not explain the enigmatic word “ha-achashtranim” (8:10), which the Gemara (Megillah 18a) does not understand but we now know from archeology means “that belong to the king” (Da’as Mikra). Compare the NKJV translation of the end of the verse (“bred from swift steeds”) with that of the more scholarly NRSV (“bred from the royal herd”). The latter is informed from ancient Persian.

Herodotus’ account can help us understand these verses. The king set the position of Haman above all the ministers and servants. The ministers who were a little lower in status than Haman were not required to bow down and prostrate, but rather to acknowledge that they were of a slightly lower status. The servants, on the other hand, were of a much lower status and were required to bow and prostrate themselves before him. This is why the Megillah stresses that the servants bowed and prostrated themselves before Haman, but does not say the same about the ministers.

In short, this is a beautiful, fascinating and useful book that is a welcome addition to my library.