The Meal Of Achashverosh 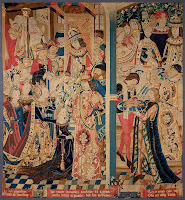 The Gemara (Megillah 12a) asks what sin merited the destruction, but for their repentance, of the Jews during the time of Purim. The first answer is that they eat at Achashverosh’s party (literally: they benefited from meal of Achashverosh). This is rejected for a technical reason, and replaced with the sin of idolatry under the reign of Nevuchadnezzar that was punished at that time, years after it took place.

In an earlier post (link), I discussed what the sin was in eating from Achashverosh’s party. I suggested that perhaps it had to do with Achashverosh being an idolater or having debauchery occur at the party. I now think that this is incorrect.

Click here to read moreThere is a parallel to the Gemara in Shir HaShirim Rabbah (7:8) which explores when the desire for idolatry was eradicated. If, as one opinion contends, it was destroyed during the time of Chananiah, Mishael and Azariah, then what sin did the Jews of the Purim story commit that merited destruction? The Iyun Ya’akov and Maharam Shif (both on the Ein Ya’akov, Megillah 12a, the latter quoted in Ge’on Ya’akov) point out that the question is not why they were punished but what they committed to deserve such a strong punishment as annihilation.

One view in the midrash is that the Jews committed idolatry earlier, before the inclination had been destroyed, and they were being punished for it years later. That other view in the midrash is that the Jews sinned by eating from the party of Achashverosh. What was the sin? The midrash states that they ate non-Jewish food (tavshil shel nokhrim). This could mean kosher food that is non-Jewish cuisine (e.g. kosher Chinese food), but that isn’t forbidden. It could also mean kosher food that was cooked by a non-Jew (bishul akum), but that is only forbidden on a rabbinic level and we are looking for a sin that merits destruction.

Therefore, the sin of eating from Achashverosh’s party probably means the wide-scale eating of non-kosher food by representatives of the Jewish community.