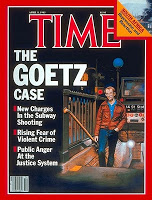 I. The Subway Vigilante

A few weeks ago was the 25th anniversary of Bernhard Goetz’s famous incident, in which he shot four teenagers trying to mug him (link). Goetz, called the “Subway Vigilante” by the media at the time, raised a national debate regarding taking the law into your own hands, and probably helped create a climate that successfully demanded the cleanup of New York subways.

I’d like to address the question, within Jewish law, whether someone in fear of being mugged may shoot his would-be robbers with intent to kill. While there may be a remote threat to the victim’s life, does that justify his use of deadly force when he can aim for the mugger’s leg?

R. Eliyahu Mizrachi, in his super-commentary to Rashi (Gen. 32:8), distinguishes between two principles in Jewish law. The first is ha-ba le-horgekha hashken ve-horgo — if someone is coming to kill you, kill him first. This means that if someone is attacking you, even if you are not sure whether he intends to kill you, you may kill him.

The second principle is that of rodef, a pursuer. A pursuer may be stopped with deadly force. However, you must use minimal force to stop a pursuer. If you can disable him without killing him but kill him anyway, you are guilty of murder. This rule, R. Mizrachi argues, does not apply to the previous principle.

When someone is pursuing you, the first principle applies and you may kill him without trying to use minimal force. You are, almost certainly, incapable of determining the real danger you face given the great personal risk and are therefore exempt from even trying. Just do what you can to save yourself.

However, when someone is pursuing someone else, only the second principle applies and you must use minimal force. Because you are not personally in danger, you are required to determine just how much force is requires and not go beyond that.

The Mishneh Le-Melekh (Hilkhos Chovel U-Mazik 8:10) agrees in principle with R. Mizrachi. He writes that someone who is being chased does not have a presence of mind and, therefore, is not obligated to warn his pursuer before attacking nor to use minimal force.

However, this seems to be quite an innovative position. Others disagree. R. Akiva Eiger (Commentary to Kesubus 33b) explicitly disputes this position. The Minchas Chinukh (600:7) points to the discussion in Sanhedrin (49a), in which Avner is condemned for killing Asahel even though Asahel was pursuing him (2 Samuel 2:18-23). While Avner was allowed to attack his pursuer, he could have disabled him and therefore had no right to kill him. According to R. Mizrachi and the Mishneh Le-Melekh, Avner was being pursued and therefore did not have to make this distinction.

The Minchas Chinukh also points to Rashi (Sanhedrin 57a sv. ve-yakhol) who states explicitly that even someone being pursued should use the minimal amount of force necessary. See also Margoliyos Ha-Yam (49a:3) for a list of relevant sources.

What we have, then, is a dispute among the authorities. According to R. Mizrachi and the Mishneh Le-Melekh, someone being mugged may shoot to kill. According to R. Akiva Eiger and the Minchas Chinukh, he should only use the minimal amount of force necessary to save himself.

2010-01-13
Gil Student
Previous: Women Who Shave Their Heads
Next: A Contrarian’s Guide to Rav Soloveitchik’s Philosophy