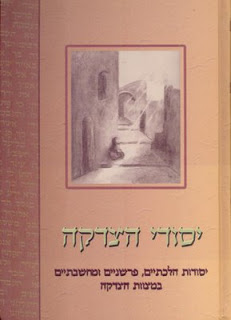 I. An Unusual Book

Yesodei Ha-Tzedakah by R. Menachem Kasdan is a unique book, although I think I have this impression mainly because I have limited exposure to this genre. When I opened the book, I expected to find a typical collection of laws, divided into chapters and with extensive footnotes documenting the literature and theoretical issues. This is standard in contemporary studies of legal topics. Given my experience with many examples of it done poorly, although there are quite a few that are fantastic, I was skeptical with this new book.

After opening the book, though, I realized that this is very different. After a short amount of time, I guessed that the author must have learned in Gush (Yeshiva Har Etzion). I don’t have confirmation of this, and I have seen that he quotes R. Hershel Schachter and R. Joseph B. Soloveitchik as his teachers, but I am still confident that this is the case. The book seems to me to exemplify the style of learning conducted at that yeshiva (although this is totally an outsider’s evaluation because I have only stepped foot in the institution once, last summer, when it was almost entirely empty because it was in between semesters).

As the title suggests, the author explores the foundations of the mitzvah to give charity.

As the title suggests, the author explores the foundations of the mitzvah to give charity. He does not deal solely with law but also with Bible commentary and theology. He starts with the relevant biblical passages and discusses the varying interpretations on both a peshat and derash level, not only what differences exist but why the varying commentators reached their differing conclusions. The biblical interpretations are then taken to subsequent levels, including the theological reasons for the different aspects of these commandments, until the author reaches the point of practical law. It is quite an exhilarating journey.

Time and again, in classic Gush fashion, the author asks a question, offers multiple answers from a variety of commentators (mainly but not exclusively Medieval), and then proceeds to list the practical differences between the different views. In this way, he thoroughly explores the commentarial, theological and legal aspects of charity, generally weaving them together into a complete cloth.

It can get confusing, although the author clearly tried his best to organize his thoughts, leave overly detailed discussions for footnotes and provide a guide in the index and Table of Contents. However, it is still a little confusing, maybe even overwhelming given the amount of material. And what I’ve described so far is only the first half of the 600-page book!

The second half of the book consists of detailed studies into an assortment of topics that are somewhat related to the book’s subject but because of their detailed natures do not fit into the chapters. To organize these random essays, the author assigns them to the related chapter, listing the addenda at the end of each chapter in addition to the Table of Contents. That way, after you finish each chapter, you can go to the back of the book and learn the related in-depth treatments of related topics.

It is in this addenda where the author shows his broad range. Topics range from detailed law (e.g. no. 9, may a recipient of charity use the money for something other than a necessity?), biblical commentary (e.g. no. 30, to what did Ibn Ezra refer when he wrote…), theology (e.g. no. 4, should you fulfill the commandment simply because God commanded it or also out of sympathy?), philosophy (e.g. no. 40, Torah studies in matters of: Internal Man and External Man, the Unconscious and Conscious Minds, Conscience and Intuition).

If I can summarize the book’s main thesis, or at least the core conclusion of the first half of the book, it is that there are two parts to the commandment to give charity — to raise a poor person’s spirits and to offer him physical support. The author finds these themes in the multiple disciplines and many sources he examines.

IV. Charity to the Non-Working

I recently posted about the question of whether there is an obligation to give charity to someone who refuses to support himself (link). The author discuses this in his first addendum and quickly quotes authorities who rule that there is no obligation. He then asks why this is the case — is it because by not working the poor person is effectively forsaking the charity (mechilah) or is there a biblical exemption of a charity giver from giving to someone who can help himself but chooses not to.

A practical difference between the two reasons is someone who does not even have enough for his basic needs and refuses to work but also refuses to accept charity. Are we still obligated to try to help him against his will (e.g. by fooling him)? If the exemption is because it is as if he forgave the charity, when he doesn’t have enough for his basic needs then we cannot say that it is as if he forgave it (I’m not sure why not but that’s what the author writes). But if the exemption is because there is no obligation to give to someone who will not help himself, then the exemption remains in force in this case.

The author then tries to prove from talmudic commentaries that there are cases where a poor person can but does not work, but neverthless we still have an obligation to give him charity. For example, and he did not want to rule on this issue but raised it as a possibility, someone who is poor and can ask his parents for money but because of personal problems chooses not to. Is the obligation to give him charity waived since he can be supported by his parents? Or do the personal problems exempt him from that avenue and we are still obligated to support him?

The author concludes with a discussion that we should not judge poorly the recipients of charity and think that if only they would work harder they would not be in such a situation.

This is a fascinating book that is rich in a wide variety of material regarding charity. From whichever vantage you approach it, the book will broaden your understanding of this commandment and bring you greater understanding and appreciation for it. Is it unique? I can’t really say because of my lack of familiarity with contemporary books in Israel. But it is unique to me.