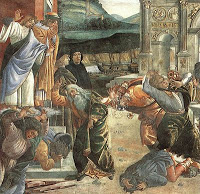 The Common Sense Rebellion Against Moshe Rabbeinu and the Mesorah

The Election of the Tribe of Levi

The Prohibition of Machlokes