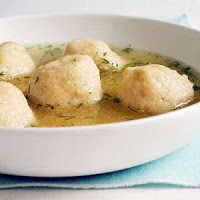 There is a well known Pesach custom is some communities, mainly Chassidic ones, referred to as “gebrokts” or “sheruya”. This term refers to the practice of those to refrain from eating any matza or matza product which had come into contact with water. Among the explanations for the development of this custom was in order to ensure that one would not come to mix matza meal “flour” with real, chametz, flour.[1] Additionally, there was once a concern that there may be some flour within the body of the matza which may have not been fully baked and therefore any subsequent contact with water would cause this matza to become chametz.

Click here to read moreWhile there are those who are unforgivingly strict in their application of the gebrokts custom, there are also a number of variations of it as well. For example, in some communities matza is not allowed to come into contact with water, however, it is permitted to come into contact with other liquids, such as fruit juice or wine. There is also some discussion of differentiating between whole matza and ground matza in the application of the gebrokts restrictions.[2] Some individuals who otherwise do not eat gebrokts on Pesach will eat such mixtures Erev Pesach. [3]

In many communities the custom of not eating gebrokts is suspended on the last day of Pesach. This concession is in order to differentiate between the first seven days of the holiday which are of Torah origin and the last day which is of rabbinic origin. In some families dramatic precautions are taken in order to ensure that matza does not come into contact with water. Among these precautions are keeping the matzot on the table covered at all times as well as not pouring any beverages before any surrounding crumbs are removed.[4]

Nevertheless, the premise of gebrokts or the concern that matza which has already been baked may subsequently become chametz is somewhat far fetched and was never accepted as halacha. In fact, the Talmud explicitly states that once matza has been baked there is nothing that can cause it to become chametz.[5] The Shulchan Aruch also rules that one is allowed to wet and re-bake matza.[6] One who has difficulty chewing matza is permitted to wet the matza in water in order to soften it and this even includes the matza used for the mitzva at the Seder.[7] It is noted that historically the custom was to permit baking with matza or otherwise allowing it to come into contact with water.[8]

The Vilna Gaon was known to cook matza [9] and it is reported that the Chatam Sofer would use matza balls for the kiddush bemakom seuda requirement.[10] It is interesting to note that in the Chazon Ishâ€™s home there was a unique method for making matza balls. The matza balls would be made from matza meal and eggs, since eggs do not cause flour to rise. [11] Furthermore, after the matza balls were ready they would be placed into boiling hot water which is known to prevent dough from possibly rising. As such, the Chazon Ish managed to enjoy matza balls on Pesach while still complying with the restriction of gebrokts! [12]

It is likely that the gebrokts custom evolved at a time when matzot were produced much thicker than they are today. As such, there may have been legitimate concern that the insides of these matzot may not have been properly baked. In our day, however, the matzot are so thin and fully baked that there is no room for this concern any more. It is also noted that even if such a concern was conceivable there would be no problem wetting one’s matza (i.e. dipping it into soup) as long as one was sure to consume it within eighteen minutes. Even the toughest gebroktsers will concede that it is permitted to chew matza on Pesach notwithstanding the water content of saliva. [13]

Nevertheless, there are some insinuations within classical halachic sources which would lend support to observing the custom of gebrokts even today. The Shulchan Aruch rules that one who feels that the matza dough one has kneaded is too loose is not to simply add flour to thicken its consistency. Rather, one is to quickly make a new, thicker, dough which should then be added to the loose one in order to thicken it up. This is because if one were to simply add flour to the existing loose dough, it is possible that the newly added flour may not get fully mixed into the dough and therefore not fully bake. If this were to happen it is certainly conceivable that such matza dipped into hot soup could become actual chametz. [14]

Ultimately, however, what began as a stringency has essentially taken on the status of a custom in our day. As such, those whose custom it is to refrain from eating gebrokts are completely entitled to continue to do so and there are plenty of halachic authorities to support this. [15] It should be noted, however, that there is no reason for anyone to refrain from eating off of Pesach dishes which have been used for gebrokts.[16] Our sages say that those who keep the custom of gebrokts, as well as those who donâ€™t, are all categorized under â€œYour nation are all tzaddikimâ€. [17]