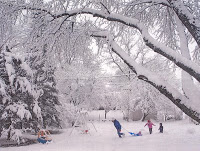 After reading R’ Gil’s post: “Shovelling Snow on Shabbos” last week, it really struck me what it means to live in the Middle East. I see snow for about six hours every year during the annual sprinkle upon Beit Shemesh. I don’t miss the snow one bit – but Gil’s post was an opportunity for some reflection on where I live from both the spiritual and climatical perspectives. Anyways, I decided to delve a little deeper into “Snow & Halacha”, and this is what I came up with.

Click here to read moreEnjoy – and feel free to join me in Israel some time soon where snow is just, well, — an internet posting!

Even snow has secured for itself a respectful place in Tanach, Talmud, and of course, Halacha. Scripture uses snow as a metaphor for the ideal shade of white.[1] We are told that snow avoids melting by “hiding” in the gorge by the stream.[2] There is documentation of a record-breaking snow fall near Hebron.[3] It is the snow of the mountains in northern Israel which is the source of the water which flows in the many small riverbeds across the land.[4] The Tanach also notes how God’s powers extend even to the snow.[5] Snow is also the frequent metaphor for purity and cleanliness[6] as well as plenty.[7]

Within halacha, snow is a recurring subject with regards to Shabbat observance. For example, some authorities rule that only snow which has fallen before Shabbat is permitted to be handled on Shabbat – while snow which falls on Shabbat itself is muktza and may not be moved. [8] Other authorities make no such distinction and permit one to handle any snow on Shabbat.[9] One is allowed to walk upon snow on Shabbat without concern that doing so will cause the image of one’s shoes to be imprinted in the snow as well as possibly causing some snow to melt at the same time.[10] One should not, however, intentionally melt snow or ice in order to use it as water.[11]

It is permissible to chop or smash snow and ice that is currently too large for use, but snow should not be intentionally squeezed.[12] Ice can be used freely to cool drinks on Shabbat without concern that in the process of doing so one is causing the ice to melt.[13] It is interesting to note that some authorities advise that on Shabbat it is better for one to add ice to a drink rather than pour a drink over ice.[14] It is permissible to make ice on Shabbat by pouring water into the ice-cube tray and placing it in the freezer, though it is always best to think ahead and do so before Shabbat.[15] It seems that ice, and similar foods, are actually considered liquids from the perspective of halacha[16] though some disagree.[17]

There are a number of halachic authorities who forbid one to make snowballs on Shabbat fearing that doing so may be a violation of the prohibition to “squeeze” or to “build”,[18] while others permit doing so without reservation.[19] It seems that one need not protest if small children choose to make and play with snowballs. However, a “snow man” should not be made on Shabbat under any conditions.[20] In a place where there is an eruv, it is permissible to spread salt upon the snow and ice on Shabbat, or even shovel it if need be, in order to prevent injury.[21] Indeed, salt was placed on the ramp leading up to the altar in the Beit Hamikdash for safety considerations whenever needed, including Shabbat.[22] One can even ask a non-Jew to do so in a place where there is no eruv.[23] Nevertheless, it must be done before Shabbat wherever possible.[24]

There is no concern for “carrying” when snow accumulates upon one’s clothes when walking outdoors in a place without an Eruv.[25] One may gently shake snow off of one’s clothes on Shabbat if one is careful not to squeeze the snow in the process or cause it to have a cleansing effect on the garment.[26] One who has an ongoing contract with a snow removal company to clear away the snow should best stipulate that no mechanical snow removal take place on Shabbat.

When faced with no other option one may urinate onto snow on Shabbat.[27] Among the reasons that using bar soap is forbidden on Shabbat is because it is viewed by some authorities as being similar to crushing snow or ice in order to change it’s form, which is ordinarily forbidden.[28] A small amount of snow upon the schach of one’s Sukka is not a cause for concern, but a large amount of snow may invalidate the Sukka.[29]

Under certain circumstance one may use a large accumulation of snow as a Mikva to immerse one’s new dishes when needed.[30] This applies only to glass or china dishes and there must be at least 240 cubit feet of snow in one area. The snow must be able to cover the inside and outside of the vessel. Air pockets will invalidate this immersion.