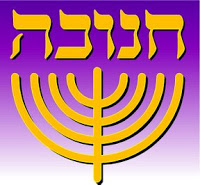 Yosef’s Reunion with his Brothers

Avraham, Gidon and the Hasmoneans

The Menorah, the War , Judaism and Greek Culture