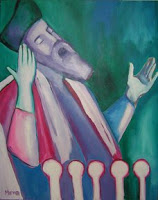 The chazzan, also referred to as the baâ€™al tefilla or shaliach tzibbur, is no less than the acting representative between the congregation that has appointed him and God. There is an entire codification of laws and customs as to who is worthy of being appointed to such office and the procedures to be followed. These rules are especially relevant with regard to the High Holidays. Some even suggest that the one who serves as the chazzan for the High Holidays is to separate himself from anything that leads to impurity three days before he is to serve.[1] The role of blowing the shofar on Rosh Hashana is considered to be more prestigious than serving as the chazzan.[2]

We should always ensure that the individual chosen as the chazzan is well known as both a Torah scholar and one who engages in good deeds.[3] It is also considered ideal that the chazzan be over thirty years old, as well as married with children.[4] With such a profile, it is likely that the chazzan will be a more mature, responsible, and pious individual. Of course, a pleasant voice is essential for the job, let alone for making it through the interview process.[5] A bearded chazzan is also considered advantageous.[6] Nevertheless, as long as an individual is desired by the congregation, objections need not be raised.[7] It goes without saying that the chazzan must be properly dressed from the perspective of both modesty and dignity.[8] Some halachic authorities frown upon a chazzan with short sleeves.[9]

Click here to read moreThe traditional “Cantorial Garb” is discouraged by many authorities owing to it’s similarity to the garb worn by clergymen of other religions.[10] While there are various customs as to when the one leading services must wear a Tallit, the Kabbalists strongly advise against wearing one for the Friday night services, calling the practice “dangerous”.[11] According to some opinions, a shochet, ritual slaughterer,[12] or a convert[13] should not serve as a chazzan, though the halacha is not like this view. Using tunes in the course of the prayers which are derived from foreign religious liturgy is forbidden,[14] though applying all other tunes and songs to the prayers is permissible even if they are not of Jewish origin.[15]

As is known, chazzanim often indulge in extensive, excessive operatics and other musical exercises pieces at various points in the prayers. A chazzan who does so in order to impress himself upon the congregation or for other self-aggrandizing motives is not worthy of the position and should be removed. However, chazzanim who do so for no other motive besides their love of God, and with the intention to beautify the prayers before Him, are to be praised.[16] Even so, excessive renditions for any purpose are to be discouraged.[17] One should note that Rabbi Moshe Feinstein, along with most other authorities, rule that a chazzan should not repeat any words of the prayers, even for the sake of â€œfitting them into the tune.â€[18] Indeed, in some situations, a chazzan who repeats words should be removed from his post.[19]

One who is in mourning for his closest relatives should not be appointed as chazzan on a Shabbat or Yom Tov, particularly during the shiva period.[20] Even one who is within one year of a parentâ€™s passing or within thirty days of the passing of other close relatives should not serve as a chazzan for the High Holidays.[21] This is because one who is in mourning is seen as one who has been the subject of unfavorable decrees, and, hence, may not be successful in arousing Divine mercy for the congregation.[22] Of course, should there be no alternative, a mourner may lead services.[23] Additionally, one who is contracted to serve as a chazzan or is otherwise committed to a congregation would be permitted to honor the arrangement and lead the services.[24]

As mentioned, the chazzan is the one who represents the congregation before God. He must keep in mind at all times that he is acting on behalf of the congregation, and intends to discharge all of their religious obligations.[25] The chazzan must be knowledgeable in the reading of the prayers, particularly with regards to proper pronunciation of the words.[26] It is also encouraged to secure a chazzan from a distinguished family, as it is known to assist in having prayers accepted.[27] A chazzan should try to immerse in a mikva on before he leads the prayers, especially on Rosh Hashana morning.[28]

An interesting issue for discussion is how it is possible to pay a chazzan for services rendered on Shabbat and holidays. It is seemingly not in the spirit of the sanctity of the day, and unbecoming of the individual. Interestingly, many authorities take no issue with a chazzan, or anyone else for that matter, receiving payment for Shabbat â€œworkâ€ when it is related to a mitzva, or performed on behalf of a community.[29] A better alternative is to arrange a chazzanâ€™s contract in such a way that it encompasses the entire gamut of chazzan-related duties, and not merely the Shabbat component of his work. With such an arrangement, the chazzan is not being paid for Shabbat work specifically, but rather to fulfill the role of a chazzan in all that it entails throughout the entire week.[30] It can also be suggested that a chazzan’s salary does not go towards the work he performs on Shabbat, but rather for the time and effort he puts in during the week to prepare his cantorial pieces.[31]

A chazzan cannot be fired unless there are witnesses to testify to some sort of inappropriate behavior warranting so.[32] It is better to have a permanent, hired chazzan on salary rather than a volunteer.[33] One who is not the designated chazzan, but is now being asked to lead the prayers should hesitate somewhat before ascending to do so, unless the person requesting is a distinguished individual, in which case one should ascend immediately.[34] In the event that no one is ascending to lead the prayers which in turn is causing unnecessary delays, one should ascend on one’s own without even being asked.[35] There is no concern for an Ashkenazi serving as a chazzan in a Sefardic congregation or vice-versa,[36] though of course, the chazzan must follow the nusach of the congregation for those portions which are said out loud.[37]

In times gone by, it was possible for the objection of a single individual to block the appointment of a chazzan. Today, however, such decisions must be made by the majority.[38] The office of the chazzan is one of great importance and should not be dismissed lightly. Nevertheless, if a congregation can only afford to hire a rabbi or a chazzan, the rabbi takes precedence.[39] He who is chosen to lead our prayers may just make the difference as to whether or not they are accepted.[40]

NEXT WEEK: “The Five Mitzvot of the Seder”. Please send me your lesser-known and obscure sources as well as anecdotes for inclusion. I truly thank and appreciate all those who sent me tidbits in preparation for this article!! [email protected]