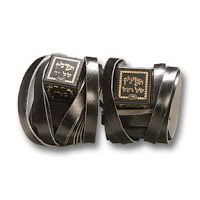 Contrary to popular misconception, the names of the various types of Tefillin, such as “Rabbeinu Tam”, “Shimusha Rabba”, “Raavad”, and even the standard “Rashi Tefillin” do not refer to Tefillin that are prepared according to the specifications of these sages. Rather, the only association between these sages and the Tefillin called by their name is merely the order in which the parchments are inserted into the Tefillin. The procedures relating to all other aspects of Tefillin production and assembly are essentially universal, culled and compromised according to the views of the majority from among dozens of sages over the millennium.

There is actually considerable debate among the commentators of the Talmud as to the order in which the parshiot should be arranged in the shel-rosh.[6] As one might suspect, there are in fact, four different views on how the four parshiot should be arranged. The rabbis most prominent in this dispute were Rashi and his grandson Rabbeinu Tam. Due to the uncertainty as to the proper order of the parshiot, many authorities recommend that one put on two sets of Tefillin, one according to the view of Rashi and the other according to Rabbeinu Tam

According to Rashi,[7] the parshiot are to be written and arranged in the Tefillin shel-rosh in the same order as they appear in the Torah.[8] Rabbeinu Tam,[9] however, disagrees and argues that the two parshiot that each begin with the word â€œV’hayaâ€ are to be placed side by side.[10] There are dozens of great rabbis who have sided with either view.[11] The Arizal is reported to have ruled that both views were correct and as such, one is required to wear two pairs of Tefillin in order to properly fulfill the mitzva of Tefillin.[12]

The Shulchan Aruch[15] rules that one is only required to concern himself with wearing Tefillin according to Rashi’s view. Nevertheless, the Shulchan Aruch recommends that “God fearing individuals” be sure to wear the Tefillin of Rabbeinu Tam as well.[16] One who is not known to be especially meticulous in the performance of mitzvot should not wear Rabbeinu Tam Tefillin in public, unless one finds himself in a community where the custom is for all to do so.[17]One should not store the Tefillin of Rashi and Rabbeinu Tam together in a single case.[18] Only one who wears Rabbeinu Tam Tefillin should write the parchments for them.[19]

Those who wear two pairs of Tefillin should recite the Shacharit prayers while wearing the Rashi Tefillin. At the conclusion of Shacharit one removes the Rashi Tefillin and puts on those of Rabbeinu Tam and recites the Shema.[20] Some also recite the other scriptural passages which are contained in the Tefillin as well.[21] There are Sefardic Jews who follow the practices of the Arizal[22], who have the custom to wear both Rashi and Rabbeinu Tam Tefillin simultaneously, in which case each set is made exceptionally small.[23]One should not switch Tefillin during the course of the Shacharit prayers.[24] Many authorities advise that one who is not married should not wear the Tefillin of Rabbeinu Tam.[25]

NEXT WEEK: “The Fast of Esther”. Please send me your lesser-known and obscure sources as well as anecdotes for inclusion. I truly thank and appreciate all those who sent me tidbits in preparation for this article. [email protected]