One of the more interesting halachic discussions in the laws of megillah is the requirement that when the megillah is read in public, it is to be read not as a scroll, but as a letter. As the Shulchan Aruch states (Orach Chaim 690:17), â€œIt is the universal practice of the Jewish people that the reader spreads out the megillah and reads it like a letter.â€ The Eliya Rabba notes (as do many others) that what this means is that one has to unroll the megillah from its scroll-like mode and fold it over, one page over another like a letter. Any of us who has seen this done during the reading of the megillah knows how awkward and unnatural a use of a scroll this is.

Click here to read moreOne who looks in the Rishonim sees almost no evidence that this is in fact what was meant by the custom to read megillah as a letter. The practice is essentially unexplained in terms of its mechanics by the Rishonim. The requirement is taken verbatim from the Geonim, who use the phrase ×¤×•×©×˜×” ×›××™×’×¨×ª (poshetah ke-iggeret) as if we clearly understand that phrase intuitively; see for example Machzor Vitri 247; Shibolei ha-Leket, Purim 198; Rokeach, Purim 238; Taz, Orach Chaim 690:10. Even Mishnah Berurah (690:56) merely notes that the megillah should not be rolled. He writes: â€œ[The megillah] should be entirely spread out and not left rolled up, but rather folded one column over another.â€

However, if one looks at the laws of a Sefer Torah in Orach Chaim 143:2, one finds an interesting halacha. Mechaber writes that â€œIf one writes a whole book of the Torah alone, even as a scroll like a Sefer Torah, one may not read from it until all five books are bound as one.â€ Rama adds: â€œOnly if they [all five volumes] are written in the form of a scroll like a Sefer Torah; but with our chumashim, even with all five volumes together, one may not recite a blessing on them.â€ The reason advanced by the Mishnah Berurah and others for not using â€œour chumashimâ€ is that since they are not formed as a scroll, not tied with gidin, not written on parchment, and not written according to all the rules of a Torah, they may not be used. This explanationâ€”clearly directed at explaining why our printed books known as chumashim may not be usedâ€”is absolutely true. However, after having seen a very rare megillah, I am now convinced it is not the correct explanation of the Rama.

The Mishnah Berurah cannot conceive of a Torah written according to all the requirements of a Sefer Torahâ€”written on parchment, by hand, with deyo, tied with gidin, etc.â€”save that it is not rolled as a scroll. But a Torah in such a form could certainly exist. I recently saw an old megillah that made this clear to me. It is written on parchment, ke-halacha, but folded accordion-style and can be placed inside a folded cover, which the manuscript librarians at Emory tell me is known as interleave folding of a scroll. Two photographs are reproduced below: 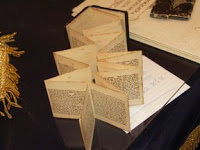 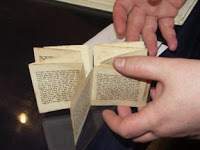 The advantage of such a format is obvious, particularly for a reference text. The interleave folding makes flipping from one part to another much more convenient than using a Torah scroll, which must be rolled from one part to another. (Of course, there may be disadvantages as well: In a Sefer Torah, the written text faces a smooth, clean parchment surface, while with interleave folding, the inked â€œpagesâ€ face each other, allowing for the possibility of rubbing or transfer.)

It is thus clear to me that Rama is dealing precisely with a work written by hand, on parchment, and consistent with all the other halachot of a Sefer Torah, except that it is bound in book form. Indeed, when one examines the Rishonim from where this halacha is derived (and one can find an excellent synopsis in the Darkei Moshe on Tur, Orach Chaim 143 as printed in the back of the Machon Yerushalayim edition), the crucial factor they speak of in invalidating such a chumash is that it is not rolled like a Torah even if it written by hand, with deyo, on parchment. If it is not in the form of a scroll, according to these many Rishonim, it may not be read from in public, even as all other requirements of a Sefer Torah are met.

I also think that this halacha with regard to a Sefer Torah allows us to understand what is really meant by the word ×›××™×’×¨×ª (ke-iggeret) in the context of megillah. A megillah need not be in the form of a scroll to be kosher, but a Torah must be.

Thus the megillah pictured above is indeed kosher. But were a Torah to be written in such a fashion, it would be pasulaccording to Rama. Even if all the other halachot are followed, Rama and many Rishonim maintain that a Torah must be in the form of a scroll which is rolled from location to location in the text and does not have pages that can be turned. A megillah, however, need not; indeed, when read in public, it must not, according to our common custom.

I further suspect that the Mechaber and Rambam disagree with the Rama in regard to a Torah and maintain that a Sefer Torah written on a proper parchment surface otherwise consistent with hilchot sefer torah that is merely folded in the inter-leave matter is in fact kosher for public reading. That is why Mechaber does not quote this halacha, and also why (as is widely assumed based on the omission of such in Hilchot Sefer Torah 10:1) Rambam denies the need for atzei chaim on a Torah as a matter of actual halacha, rather than logical convention. A Torah scroll folded as a book does not need such rollers. (For more on the dispute as to whether a Torah needs amudim, see Yoreh Deah 278:2 and the comments in Pitchei Teshuva 278:3.)

These pictures provide an insight into what the Rishonim actually had in mind, I suspect, when they spoke about megillah as a scroll, and what Ramban, Mordechai, Raavan and Rama intend to prohibit when they insist that a Torah must be a scroll.

If anyone else owns a megillah like this, or has seen one, or even knows a sofer who makes them in this way, I would appreciate being contacted at this address.