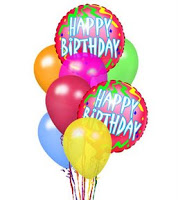 â€œMost people cherish the day on which they were born and make a party on that day.â€[1]

Judaism teaches that a birthday is not just another day. The Torah even offers some insights and party tips on how a birthday is to be observed.[2] Everyone should be sure to know the date of his or her Hebrew birthday. One is advised to send a greeting card to others on the occasion of their birthday.[3] Oddly enough, the only time we find a birthday party mentioned anywhere in Tanach is in relation to the wicked Pharaoh,[4] though historically Jewish kings would celebrate their birthdays as well.[5]

The Jewish nation as a whole celebrates its birthday every year â€“ Pesach! This holiday of liberation and redemption has often been referred to as the birthday of the Jewish nation. Indeed, no less a personage than the prophet Ezekiel recommends that we observe Pesach as a national birthday party.[6] Rashi even suggests that we should each imagine that weâ€™re newborn babies every year at Pesach.[7] Pesach is also the birthday of Yitzchak Avinu.[8] In fact, the inauguration of the Mishkan was delayed from it’s completion in Kislev until Nissan in order that the inauguration serve as both a dedication of the Mishkan as well as a celebration in honor of the birthday of Yitzchak Avinu.[9] Similarly, Shavuot is somewhat of a birthday party for King David as well.[10] It is interesting to note that the date on which the world was actually created remains unresolved, and hence, we donâ€™t truly know when to celebrate its birthday.[11]

Click here to read moreWhile a birthday party should include some delicious birthday cake, one might want to consider avoiding the practice of lighting candles on the cake, as it’s actually an evil pagan custom, according to Philochorus, the Greek historian. It was even believed that birthday candles have the power to make dreams come true, hence the custom of making a wish before blowing out the candles.[12] It is also worth noting that blowing out candles at any time is to be discouraged, due to the close symbolic connection between a candle and a soul.[13]

The day of oneâ€™s birth offers that individual the mystical benefits and powers of what is known in Kabbala as â€œascending fortune.â€ In fact, when having attacked the Jewish people, the evil Amalekites sent those soldiers who were celebrating their birthday to the front lines in confidence that the merit of their birthday would make them victorious and protect them from harm.[14] Similarly, to Haman’s dismay, it was the merit of Moshe Rabbeinu’s birthday that the Jewish people were saved from Haman’s evil plot.[15] It is therefore considered worthwhile to seek a blessing from one celebrating their Hebrew birthday. Such blessings are said to have a better chance of being fulfilled.

It is appropriate on oneâ€™s birthday to focus on oneâ€™s individuality and reflect on oneâ€™s personal interpretations of the Talmudic teaching that â€œthe world was created for me.â€[16] It is also appropriate to hold a celebratory meal on one’s birthday. When one says Divrei Torah at such a meal, it turns the entire experience into a Seudat Mitzva.[17] We are told that even the angels celebrate the birthdays of Tzaddikim and consider the day a Yom Tov.[18]

The acceptance of good resolutions in honor of oneâ€™s birthday contributes to the Jewish nation as a whole, and helps bring Mashiach closer. The power of change in one’s behavior on oneâ€™s birthday has the potential of bringing the redemption on that very day.[19] It goes without saying that the 12th birthday for girls and the 13th birthday for boys have special significance. The Zohar teaches that from the perspective of joy and celebration, the day of one’s bar mitzva is comparable to the day of oneâ€™s wedding.[20]

Just as the birthday of our people is celebrated each year with rites and rituals, so too, the birthday of every individual Jew should be observed accordingly. In recent years, rabbinical authorities, most notably the late Lubavitcher Rebbe,[21] have compiled a number of customs to be observed in honor of oneâ€™s birthday, which include to endeavor to be called to the Torah on the Shabbat before oneâ€™s birthday (when the birthday occurs on a day that the Torah is read, one should be called to the Torah on that day, too), to dispense extra charity on one’s birthday, and to throw a party with one’s family and friends. Any mitzvot that one performs one’s birthday, especially the giving of charity, will have a greater impact both in terms of accomplishment as well as character development.[22] Some authorities suggest making a siyum in honor of the occasion.[23]

Additionally, in the spirit of the day, it is commendable to pray with greater intensity and concentration (especially with the recitation of Tehillim), to accept upon oneself some new act of piety or Torah observance, and to make resolutions for the coming year. One should study the Psalm that corresponds to one’s age, along with the traditional commentaries, on one’s birthday. For example, one who is 30 should study Chapter 31 of Tehillim. It suggested that one recite the chapter of Tehillim which corresponds to one’s age every single day.[24] It may just be that one’s 60th birthday celebration should be the most joyous.[25] Other sources, however, seem to suggest that it is the 50th birthday that is especially significant,[26] while other authorities list the 70th,[27] and 80th birthdays as the most significant.[28]

It is interesting to note that there exists a view that a birthday is actually no cause for celebration at all.[29] This idea being based on the famous Talmudic dispute which concludes that it would actually have been better if man had never been created.[30] It is also noted that in light of the fact that the only scriptural mention of birthdays is in relation to Pharaoh, it may be reason to suggest some hesitation in celebrating them.[31] Other authorities consider celebrating birthdays a Gentile custom.[32] There is also a view that one should consider making the anniversary of one’s bris the occasion for an annual celebration rather than one’s birthday (a brisday party?).[33]

Nevertheless, the normative Torah approach is not like these views. A Jewish birthday is indeed to be considered a very special day.[34] It is certainly not a day to be wasted, but rather a day to be maximized with Torah study and mitzvot. We must also be sure to thank God for our milestone, which some do by reciting the blessing of Shehecheyanu in conjunction with new clothing, or the like.[35] There were even great sages who celebrated their birthdays.[36] The Talmud even notes the birthdays of our forefathers which conveys to us the importance of a birthday.[37]

NEXT WEEK: “Chazzanim / Ba’alei Tefilla”. Please send me your lesser-known and obscure sources as well as anecdotes for inclusion. I truly thank and appreciate all those who sent me tidbits in preparation for this article!! [email protected]