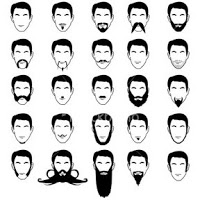 R. Meir Soloveichik writes in Commentary about the prohibition of shaving with a razor and the possible rationale behind it (link):

By forbidding Jews to destroy their hair, the Bible warns them away from seeking the siren song of eternal youth. By encouraging Jews to grow beards, it reminds them that they will not be young forever, that they must prepare the ground for those who come after, just as their fathers did for them…

Similarly, for Judaism, it is not the young or the celibate who are most worthy to be revered, but rather those who have already raised children and, even better, been blessed with grandchildren.

And throwing in some irony:
Click here to read more

I, too, am a creature of the culture of extended youthfulness, and not just because I do not have a beard. I regularly call men twice my age by their first name (although I draw the line at men whom I do not yet know)…

Nevertheless, and for the sake of my children, I hope that I will internalize the lesson embodied by the Jewish penchant for beards and reinforced by the Jewish religious system in general. I hope that I will have the strength to resist the sundry temptations of our benign American Egypt and embrace the path of Abraham, the man chosen by God to found a family that from generation to generation would communicate to the world the principles of justice and righteousness. And I hope I will also remember Joseph Epsteinâ€™s admonitionâ€”that there is no quicker route to senility than through the all-consuming and utterly futile effort to stay young forever.