Rav Soloveitchik on the Akedah

The Akedah, the story of the binding of Yitzchak, lends itself to multiple interpretations. The following is what R. Joseph B. Soloveitchik wrote about this in the most recent book published in the posthumous Me-Otzar Ha-Rav series, Abraham’s Journey: Reflections on the Life of the Founding Patriarch (ed. David Shatz, Joel Wolowelsky, Reuven Ziegler), pp. 10-12 (emphasis added):

One of the many events in Abraham’s life that are of central significance because of their paradigmatic role in our historical drama is the Akedah, the binding of Isaac. According to Nahmanidean historical semantics, the Akedah foreshadowed Jewish martyrdom down through the ages. The Akedah was the portent of the many sad and tragic situations in which Jews were summoned to bring the supreme sacrifice, their very existence. But the portent was subject to multiple interpretations, and Jews enjoyed the freedom to interpret the strange scene of the Akedah in a variety of ways. 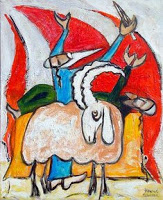 The basic idea of the Akedah is nurtured by the service awareness. Man is a servant of God. He belongs completely to God–body and soul… Hence, God from time to time calls upon man to return to Him whatever is His. He demands that man give not a part but the whole of himself…

Of course, the idea of sacrifice is a cornerstone of Judaism and the Akedah has inevitably introduced sacrificial action as a part of our historical drama. Yet, as we have said, the drama of the Akedah is multi-semantic, lending itself to many interpretations. God demands that man bring the supreme sacrifice, but the fashion in which the challenge is met is for man to determine.

There are two ways in which the total sacrifice is implemented–the physical and the experiential. The choice of the method is up to man. The need for sacrifice was established as an iron law in Jewish history. However, whether man should sacrifice on a physical altar atop some mountain the way God summoned Abraham to do or in the recesses of his personality is man’s privilege to determine. Whether the sacrifice consists in physical agony, pain, and extinction of life or in spiritual surrender, humility, and resignation is man’s affair. God wills man to choose the altar and the sacrifice.

Abraham implemented the sacrifice of Isaac not on Mount Moriah but in the depths of his heart. He gave up Isaac the very instant God addresses Himself to him and asked him to return his most precious possession to its legitimate master and owner…

There was no need for physical sacrifice, since experientially Abraham had fulfilled the command before he reached Mount Moriah… Had Abraham engaged the Creator in a debate, had he not immediately surrendered Isaac, had he not experienced the Akedah in its full awesomeness and frightening helplessness, God would not have sent the angel to stop Abraham from implementing the command. Abraham would have lost Isaac physically.